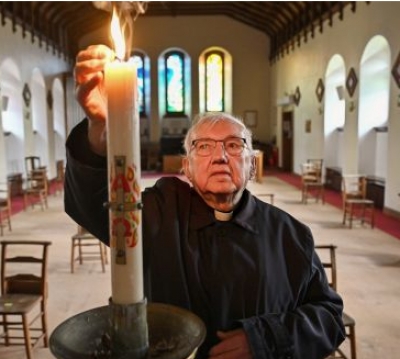 This is an article from the Irish Times

Corkman Msgr Basil O’Sullivan (88), parish priest of Holy Family, Dunblane, and Our Lady of Perpetual Succour, Auchterarder, in Scotland, was on his way to meet his bishop on the morning of March 13th, 1996, when gunman Thomas Hamilton entered the local school and opened fire on a class of five year olds. In the deadliest mass shooting in British history, he shot 16 children and their teacher dead, injuring 15 others.

“I had a meeting that day with the bishop but I passed the school that morning having no idea what had happened. It was already over. I saw no sign of any activity. So when I met the bishop, he said you had better go back straight away. I went straight back. It was a pretty harrowing time.”

“It’s burned into the memories of everyone involved. I had to bury two of the little boys. Of course some of the children were injured as well, I had to look after them too in hospital. For the town to get back to normal it took well over a year or so.”

He was chaplain at the nondenominational school. “We had three chaplains, two of them were Protestant of course and I was the Catholic one. They made no distinction. We worked as a team. It was a very happy ecumenical arrangement. They were colleagues.”

He agreed that, sadly, the massacre is what Dunblane is best known for, before adding, “It’s famous for Andy Murray, too.” The tennis player was a nine year old at the school then. Canon O’Sullivan, however, has never met him.

In 2012, his experiences at Dunblane prompted him to contact Msgr Bob Weiss of St Rose of Lima parish at Newtown, Connecticut in the United States when gunman Adam Lanza killed 20 children and six teachers at the Sandy Hook elementary school before killing his mother and then himself.

“I emailed him and he emailed back and I went across for the first anniversary of the shooting,” Msgr O’Sullivan said. A concelebrated Mass they held then to mark the Sandy Hook anniversary featured in a film, Lessons from a School Shooting: Notes from Dunblane, which went on later to win the best short documentary award at the Tribeca Film Festival in New York.

As a priest, Msgr O’Sullivan has only ever served in Scotland but never lost his Cork accent. Indeed, and not untypically of people from that county, when asked whether with the name O’Sullivan he was an Irishman, he responded: “..a Corkman, from Blackpool in Cork, same area as Jack Lynch came from.”

He was “the youngest of nine, all gone to heaven”. After attending primary school at the North Monastery, he went to St Finbarr’s diocesan college at Farranferris as a day boy before heading to All Hallows seminary in Dublin.

It was “always a college for sending people overseas, a missionary college founded by a Dublin priest, Fr John Hand, way back in 1840, or thereabouts. That’s how I ended up in Scotland. At that time, there seemed to be plenty of priests in Ireland. I went there at 18, a callow youth,” he said.

He recalled how “33 of us were ordained together, happy days”, by another Corkman and All Hallows alumni, then auxiliary bishop (later bishop) of Honolulu, John Joseph Scanlan.

Of his 33 colleagues ordained that day “13 went off to the States, 11 went off to England and Scotland, five to Australia and New Zealand, four to South Africa, they divided up like that”.

He was sent to Dundee in Scotland “and after that I was sent off to Rome to study canon law. I spent some years in the Scots College there, then back to Dundee. I was sent around the place over the years. I’m here in Dunblane for a long time, 33 years, that’s a long time.”

Indeed it is, and though Catholic priests can retire at 75, he has continued to minister. “The bishop was particularly keen for me to stay on and I was keen myself. I was quite happy to stay on. I didn’t want to look at four walls.”

Similar restrictions on public worship due to the pandemic have applied in Dunblane, as in Ireland, and even when allowed they have resorted to “Mass on the lawn” as “our churches are small, so social distancing would make it impossible to accommodate a congregation”.

In a tribute, his bishop Stephen Robson said Msgr O’Sullivan had “always been there for his people, through thick and thin, serving with fidelity and love” and was always a comfort to “those who still mourn the terrible attack on Dunblane primary school in 1996 and to help heal the memories of that tragic day”.

For his own part, and 89 years old next month, Msgr O’Sullivan hopes to stay on in Dunblane. “A lot depends on the bishop,” he said, but he has no plans to return to Cork. “I’m too long away and all my siblings are gone to heaven.” As for losing the accent. “No, that wouldn’t do would it? My Cork accent will never leave me,” he said.