A 13th century chapel in Dunblane that lay hidden beneath mud and undergrowth for many years has been painstakingly restored. Its trappings and church items, from books of worship to communion vessels, had surrendered to time, the identity of the body buried beneath a table alter similarly lost. The chapel is open as a visitor attraction, place of contemplation and even marriage venue. It is situated within the grounds of Old Churches House. Entry is free. 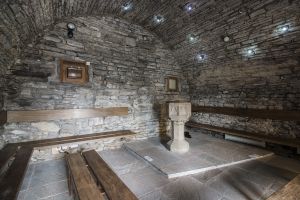 Volunteers stumbled across the building, then covered in mud and ivy, back in 1961 and while its original purpose was unknown they are said to have referred to it as a chapel. They erected a wooden cross on the platform outside – which still stands today – and investigated the building further in the months that followed. Those investigations revealed that a body had been buried in an east west position under the table alter, a position favoured ecclesiastically and one that pointed to the structure’s use for worship and burial. Other clues were a well at the left hand side of the chapel, sufficient enough to provide a small bowl of water for communion, and small cupboards at the back, thought to have once held communion vessels and prayer books. The chapel was visited by the Queen in 1967 and Pope John Paul II gifted a unique spinning wheel in 1982, which is still have on display.

The owner of Old Churches House – which was known as Scottish Churches House and used by church groups of all denominations for holidays, respite and meetings – carried out the renovation of the chapel, installing new lighting and seating as well as fitting a reclaimed font from a Church in Selkirk. Take a look at the Old Churches House website and read the leaflet about the Chapel (available at Old Churches House).

More in this category: « Allan Water and The Haugh Kippenrait Glen »
back to top