×
You are here: Home 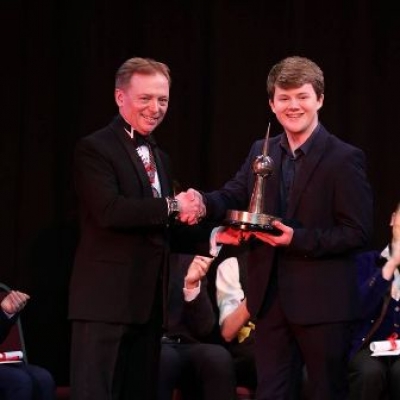 A Dunblane youngster is off to Las Vegas after winning top honours at a magic competition in London.  Eighteen-year-old Adam Black was awarded the Magic Circle’s young magician of the year title at their London headquarters. Adam beat five other young magicians, performing his signature Rubik’s cube routine, to take home the prize. Former Dunblane High School pupil Adam “still can’t quite believe it” and hopes he will be able to make a career out of his success. Taking to social media after winning the prize, he said: “Over the moon to announce that I have won Young Magician of the Year.“Thank you to everyone who has helped with the act and huge congratulations to all the other competitors, you all did great!”
Along with a trophy, Adam will also receive free membership of the Magic Circle and a trip to Las Vegas to visit McBride Magic and Mystery School. As a member of the group, he will be able to attend their events as well as learn tricks from the group’s seasoned professionals. Adam discovered his love of magic at the age of 10, after watching a live performance at Stirling Castle. He said: “I saw the magicians and was amazed, I said to myself ‘I want to do that.’”
Before taking to stage magic, Adam practised a few tricks he found online and showed them to his friends. From there, he joined a Young Magicians Club and has performed at a number of Dunblane Boys’ Brigade concerts and pantomimes over the years.

Along with card tricks, Adam’s specialist trick involves solving a Rubik’s cube in 15 seconds, before placing an unsolved cube in a paper bag. He then hands the bag to a volunteer, who opens the bag to find that the cube has been solved.
In 2017, Adam went on a work experience placement with the Edinburgh International Magic Festival, which saw him meet his magic heroes Penn and Teller. He said: “It was a great feeling, I’ve been watching their performances for years.” Adam will be performing on the Forth Valley Magic Circle’s annual Tricks at the Tryst which takes place on May 11 at Falkirk Town Hall. On the night, he’ll be performing the routine which won him his Young Magician of the Year award. Magic Circle club president Scott Penrose congratulated Adam on his success. He said: “It’s great to see so much fresh magic and the magicians of the future compete for this wonderful trophy. “Adam will no doubt have a great future following in the footsteps of some many others who have gone on to establish a great career.”

Read 971 times
More in this category: « Parking cars by Macrae Monument on Sheriffmuir Pedal Power available for Dunblaners »
back to top