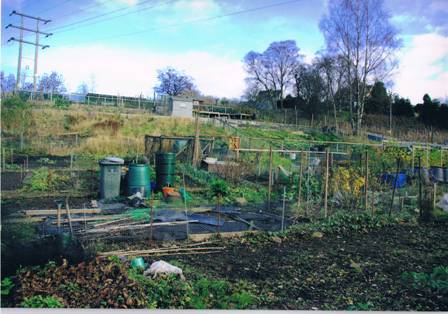 Dunblane Allotment Group (DAG) was formed in 2004 with the aim of re-opening the derelict allotment site at the Laighhills, which had fallen into disuse in the early 1980s. The next nearest sites are at Bridge of Allan and Stirling with long waiting lists. This has been a major development for the Dunblane community, providing a significant new amenity for the town in line with the current environmental agenda.

The 60,000 square metre site houses 53 plots of varying sizes. Work by 3 volunteers began in November 2004 and has progressed from there to a constituted organisation run by volunteers. The Management Committee meets monthly with open meetings held four times per year. Volunteers also work regularly to maintain the site and work parties are organised at intervals throughout the year to tidy up. The Annual Potato Day is held on the first Saturday in March (Check 'What's On' for the details). There are now 5 starter plots for members to try before taking on a full plot. Read more about DAG here.

In April 2016, a group from the Criminal Justice Team have made life much safer for the members of the Dunblane Allotment Group by relaying paths, which had become overgrown and very slippery, in the allotment. Read More

Read 897 times
More in this category: « Music at 'the Dunblane' on Tuesday Nights from 8.30pm Dunblane Likhubula Partnership »
back to top