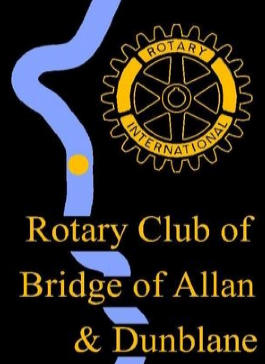 The Rotary Club of Bridge of Allan & Dunblane was formed in 1973 and has 42 members. Situated in the heart of Scotland, we cover the communities of Bridge of Allan and Dunblane. The Darn Walk runs along the AllanWater which links the two communities, as depicted by our Club Banner. Robert Louis Stevenson was a frequent visitor to the area and the Darn Walk has a cave, said to be the inspiration for Ben Gunn’s cave in Treasure Island.