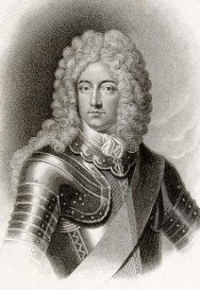 The speaker will be Bill Inglis. To mark the 300th anniversary of the Battle of Sherriffmuir, Bill will describe the background and outcome of this notable local clash between the forces of the Jacobites and the Hanoverian Government.

Our special 300 year anniversary ride for the Battle of Sheriffmuir follows the Jacobites and Government forces from their camps, up Sheriffmuir and beyond, accompanied by our historian.

25 mile of scenic, rural roads, over steep hills and by rivers with brief stops to look, listen and lunch. Best for moderately fit cyclists. Electric bikes can be booked.

Lunch is sandwiches, cakes and hot drinks and a bit of history chat.

There will be an event on Saturday 7th November 2015 in Cathedral Halls & Dunblane Museum 12 - 4pm. "The Proclamation" will be at 12 noon.

Hear the commander of the Jacobite soldiers declare the City of Dunblane loyal to King James III/VIII.

Read 870 times
More in this category: « Revised proposals for Park of Keir Joni's Blog : Hand Bell Groups »
back to top