You are here: Home News Planning Application for Kippendavie Wood?

Community consultation about a possible planning application for Kippendavie Wood (north end) took place at the Dunblane Centre on Tuesday 7th May 2013. Further information including a location map can be accessed here

One Person’s Response to the Possible Development of Kippendavie Woods

The Ian Dalgleish Trust is considering the possible development of the Kippendavie Woods, although no planning application has yet been submitted.  Their agents are Victoria McCusker and John Maccallum of Bell Ingram and Bobby Halliday, Architects. 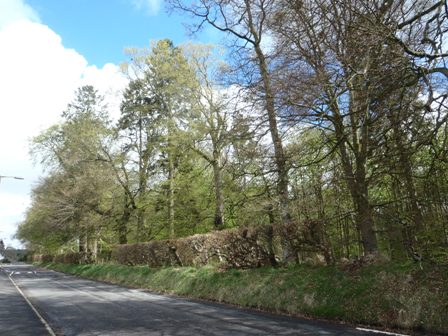 Public Consultation was held on 7 May at the Dunblane Centre. It was well attended, not only by residents living within the immediate vicinity of Kippendavie Woods, but others living throughout Dunblane.  There was general concern at the potential loss or erosion of woodland habitat.

The Agents describe the wood as disused but yet this small area of woodland is extensively used by rooks, bats and dog walkers. Others choose to walk through this green corridor rather than on formal footpaths, children walking to school and children playing. The Agents stated that the Trust requires some financial gain so that they can maintain part of the woodland.  But, I would argue that any responsible landowner has a duty to maintain their land.  Had they not allowed the wood to degrade, they would have required less expenditure to regenerate it.

The artist’s impression of the ‘eco-houses’ suggests that the houses would be built close to mature trees.  These trees are likely to be deemed dangerous to residents.  Any construction activity is likely to damage tree roots.  The canopy of the trees would reduce light and ‘solar gain’ in the houses, thus reducing their eco-credentials. This area of woodland is designated as ‘Green Corridor’ in the proposed Stirling Local Development Plan.  This designation was reached after much public consultation and clearly expresses the wishes of the local community.

This small area of woodland gives connectivity with other wooded areas within Dunblane, and eventually with the Central Scotland Green Network.  Building on any part of this wood would damage its integrity and split it into two tiny pockets of woodland.

The development of buildings on this land would also be outwith Stirling Council’s stated policies, both in the Local Plan 1999 and the proposed Stirling Local Development Plan.