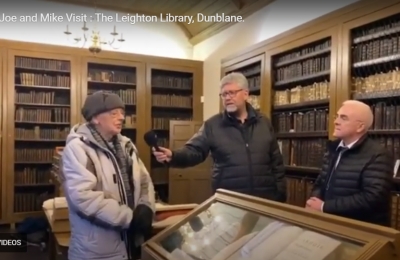 HERE IS THE LINK https://youtu.be/zy2QsT4f-a8

An appeal has been launched to carry out £400,000 of restoration work on Dunblane’s historic Leighton Library building

The Grade-A listed building at The Cross, erected in the late 17th century, contains around 4500 books – the oldest dating from 1504 – and includes masterpieces and first editions like The Edinburgh Edition of Robert Burns’ poems (1787), Dr Johnson’s Dictionary of the English Language (1755), Thomas Paine’s The Rights of Man (1791), a signed copy of Queen Victoria’s Highland Journal, presented to the Library by Queen Victoria herself, and a first edition of Adam Smith’s Wealth of Nations. There is also a collection of early maps, including a rare American Atlas from 1775.

Alastair MacDonald of the the Leighton Library Restoration Programme said: “We’re keen to raise the profile of this ‘hidden gem’ library for a number of very special reasons. Whilst the book collection is in very good condition, the building housing it, now some 333 years old, is in pressing need of restoration. “In particular cement-based harling applied some forty years ago is now considered detrimental to the fabric, as it effectively prevents the building from breathing and encourages damp in the walls. “This needs to be removed and a breathable lime-based harling applied. Additionally, several areas of stonework are eroded and need repair. The roof and chimneys need repair. The front of the building has a particularly fine marble cartouche from the late 1600s, which once bore the Bishop’s coat of arms. Specialist advice has been received that this too needs to be removed, the fixings replaced, and the whole thing restored by specialist conservators.”

Originally intended to house the collection of Bishop Robert Leighton, who bequeathed his library to Dunblane in 1684, the collection grew over the 18th and 19th centuries. Opening its doors in 1687, the Library was originally intended for the clergy of Dunblane Cathedral. It later became a subscription library and a reading room until the mid-19th century, when it was effectively closed up until restoration by volunteers in the late 1980s. It is now managed by a small charitable trust and opens to the public in the summer season.

Mr MacDonald added that the trustees have set up an executive group to address the conservation project. He said: “We have an architect on board who is qualified in the conservation of historic buildings.
“We now have a detailed schedule of required works, for which the current cost estimate is around £390,000. It’s a great deal of money to find. Even although the Trust has a small income from donations, and occasionally benefits from legacies, these reserves cannot even begin to meet the cost of the repairs. “We have made applications to various funding bodies for grants, including Historic Environment Scotland, but there still needs to be a considerable local fundraising effort, for up to at least £150,000 preserve this treasure for future generations. It is hoped, if funding can be secured, to start the repairs early in 2022.”

Following discussions with Stirling Council, and taking on board feedback from potential funders, the group is also looking at how to open up the Undercroft, situated on street level, with the Library on the first floor, both as a community and library asset. Mr MacDonald said: “We hope to work with neighbouring historic sites, such as the Museum and the Cathedral, both of whom get a great many more visitors than us, to promote the Library and the wonderful Cross area of Dunblane.”

Neighbouring hotel Old Churches House, part of tourism and hospitality specialists the Fusion Group of Companies has promised to help the Trust develop a viable plan for private tours for both individuals and tourist groups.
Alex McKie of the Fusion Group said: “We are happy to help in any way we can, perhaps giving a more commercial edge to proceedings by advising on how the Trust can best market the Library; how best to publicise the fund raising, and how to effectively price and promote tours.”

Donations can be made at www.leightonlibrary.org.uk

Read 453 times
More in this category: « Protesters in Dunblane Replacement of Bridge on Darn Walk : Update »
back to top