You are here: Home News High Street flats (and shops?) for sale! 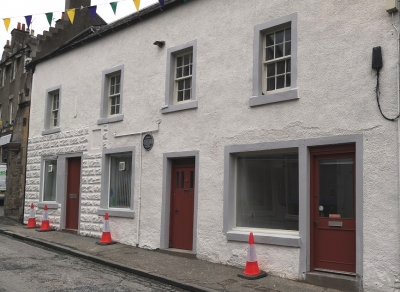 This High Street building, that was brought back from the brink by local community action, recently transferred ownership and the three flats are now for sale. The future ownership of the shops is presently unclear.

The building at 22 to 24 High Street had been owned for many years by a Stirling-based landlord with many vacant properties around Central Scotland. He has now died and executors for his estate put the building on the market just before Xmas and it was sold.  In their turn, the new owners have put the three flats up for auction.

Through the Community Council, the community secured funding from Tesco Bags to undertake essential repairs to the building and get its facade newly painted - read the article published at the time

Read 728 times
More in this category: « COVID-19 Partnership: Funding Open Zoom into DCC meeting on 3 March »
back to top