You are here: Home News Your Stirling: You Decide - Dunblane projects 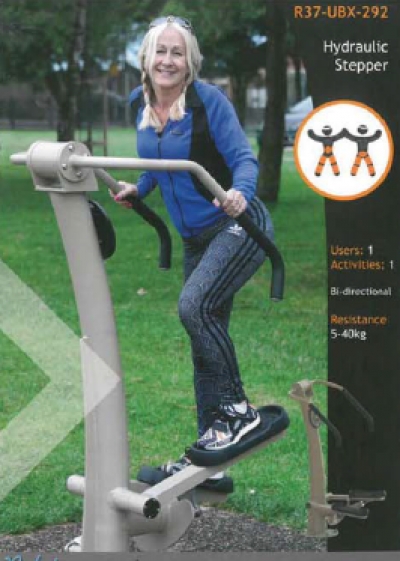 During the Your Stirling: You Decide process, the proposals below were successfully voted for by local people. You can also see updates on these and other proposals on the council website.

To create an outdoor gym, preferably in a central location e.g. Laighhills, Drying Green or Braemar Park.
The Delivery Group can now reveal the final Outdoor Gym. The outdoor gym will consist of 12 pieces of hydraulic and resistance exercise equipment (see below) some of which is accessible and user friendly for people with disabilities. Laighills was selected as the park for installing the equipment as Braemar is not Council owned and Newton could not be used due to fl ooding. The successful proposal is now being actioned and will be fully installed by the end of June 2020

Resurface footpaths in Dunblane so that they can be used by people with impaired mobility.
A number of paths were suggested by the community and the Delivery Group can now reveal the path upgrades that are going ahead are The Haining, Perth Road / Beech Road path and the Perth Road / Four Ways Roundabout path. The successful proposal is now being actioned and will be fully installed by the end of June 2020.

Initial meeting - 12 September 2019
Discussions took place with delivery group on types of accessible toilets and the possible locations including issues relating to them such as loss of existing toilets.

Meeting - 26 September 2019
More discussion took place on the public understanding of accessible toilets and the group had further discussions on locations.

Meeting - 31 October 2019
Discussions took place on the three locations being considered. Architects have been commissioned to carry out site surveys and report back on feasibility and accessibility. Feedback will be available late January when a meeting will be organised.

Read 3410 times
More in this category: « Rosina set to retire from Dunblane local office Green Online Consultation »
back to top