×
You are here: Home

Laigh Hills Park is a large, fairly natural area easily accessed from the Cathedral and the centre of Dunblane. There is a play area at the south end of the Laigh Hills and this is the first part you come to. The play equipment at the site has recently been upgraded (2018) and includes a multi-unit climber, springies, twisted slide, dutch disc, helter skelter and swings. There is a small, sand play area with rope climber for young children. 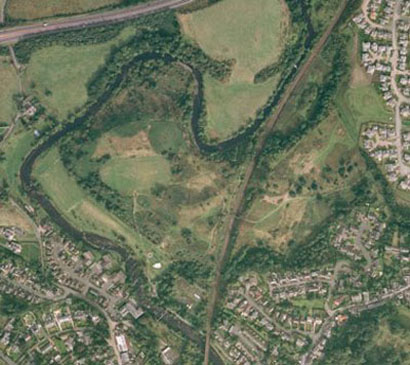 Head up the track behind the swings and you find a hidden skatepark, built in the last few years after 10 years of fundraising by a local group. Now recognised nationally as a good comprehensive facility it is well used by local skateboarders, skaters and BMX bikers. The park has 2 full-sized grass football pitch well used by local teams. Although all of these uses seem at odds with the "natural" tag we started with, the real beauty of the Laighhils starts behind these facilities where the ground becomes wilder and you feel you are wandering into a quiet wilderness. Here the last remaining sand martins of Dunblane still nest in the sandy banks above the river. Brambles wait for collection in autumn and herons can be seen slowly flying overhead or standing still as rocks before striking their prey in the river.

A network of paths criss-cross the Laigh Hills so it’s easy to explore and discover a great variety of plants and animals.   Although mostly fairly open, some parts are well wooded with scattered trees and scrub, including many native to Scotland such as oak, ash, birch, alder, willow, rowan, bird cherry, hawthorn, hazel, elder, holly, blackthorn, honeysuckle, wild rose, gorse and broom.  Trees and bushes provide nesting places for birds, whilst their blossoms are a source of nectar for bees and other insects, and berries are valuable food for birds in winter.  The Scouring burn meanders south through the Laigh Hills to join the Allan Water. 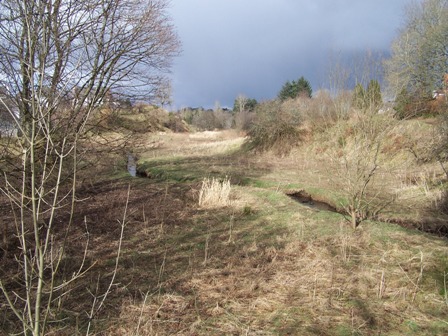 Along the banks of the former are extensive reedbeds as well as small pools which provide breeding grounds for frogs, so lookout for frog spawn in spring and hopefully tadpoles and tiny frogs later on in the summer.  Frogs have smooth shiny skins, whilst a toad’s skin is warty and rather dull.  It’s best not to move frog spawn from pond to pond as this can spread diseases and invasive non-native species – and in any case, if a pond is suitable the frogs will find it themselves!

If you approach quietly, the Allan Water is a good place to watch dippers – small dark birds with a white throat and chest which bob up and down on stones in the river, then plunge into the water to catch their prey – insect larvae and freshwater shrimps.  Dippers nest in crevices in the riverbank and in old walls and bridges – and are normally only seen on unpolluted rivers.  Mallard ducks are also common, particularly near the bridge at Mill Row, and in winter goosanders can often be seen on the river.

Otters frequent the Allan Water, though are elusive and not often seen.  However, you might find their tracks – with their characteristic 5-toes – on snow or mud by the riverbank. Mink are also found in the area, and are much more likely to be seen than otters, which are generally very shy.  American mink first became established in the wild in Britain in the 1950s following numerous escapes and releases from fur farms and have now spread throughout most of the country.  They are an invasive nonnative species and a risk to biodiversity.   Mink are linked to the drastic decline of water voles (the character ‘Ratty’ in Wind in the Willows) in the UK, and also prey on a range of bird species.

How to get there  From the High Street, walk to the main entrance of Dunblane Cathedral. Turn left at the entrance and follow the path round and head to the West Door then the pathway in the direction of the river.  As you leave the Kirkyard turn right and follow the Haining, which leads past the Council car park and becomes a pedestrian walkway by the river. Go under the railway bridge, past the footbridge (known locally as the Faerie Bridge) and on into the park. The play park is straight ahead. Care is needed on some of the paths on the Laigh Hills but on a warm summer day the side of the river offers many locations for a quiet picnic.

More in this category: « Ochlochy Park Holmehill »
back to top