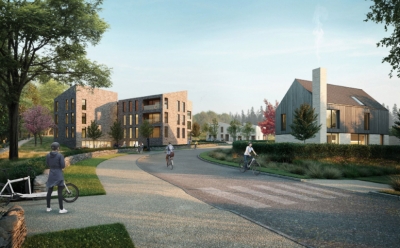 Ristol Consulting Ltd contacted the council on behalf of Kippendavie Group Trust to request a formal screening opinion on whether a planning application for residential development on land 50 metres east of Kellie Wynd would need an Environmental Impact Assessment.

Planners at Stirling Council have revealed that a specific EIA is not being sought because it was not believed the development, of 44 homes, would result in “a significant effect on the environment”.

However, the council stated: “Any forthcoming application should be supported by information which considers the environmental impact of the proposed development including a comprehensive package of habitat and ecological surveys and any necessary mitigation, archaeological report, site investigation report, transport assessment, air quality assessment, landscape and visual impact assessment, etc.”

The two-hectare location forms the western part of a larger agricultural field which is used for livestock grazing. To the west, between the site and Kellie Wynd, lies an area of scrub, semimature trees, open space and a football pitch.

There is also an unnamed burn running along the eastern edge of the housing estate at Kellie Wynd. To the north of the site is mixed woodland and Ryland Burn, beyond which is Ryland Lodge and Kippendavie Mains.

To the east of the site is a continuation of the field which extends, on rising ground, towards woodland and south is another field, with two ponds to the south west, The Stirling Observer reports.

Vehicular and pedestrian access to the proposed new housing scheme would be formed off Kellie Wynd.

In their decision on the EIA, council planners said: “The proposed development will be of comparable scale to that of the adjacent established residential development. There are no similar developments within the vicinity where cumulation is an issue.

“There are no areas that are protected under international or national legislation for their ecological value which could be affected by the construction or operation of the proposed development.

“The nearest SAC and SSSI are located approximately 1.8km to the south east of the site with their notified interest being that of woodland habitats and invertebrate assemblages. Given the distance and lack of connectivity, it is not considered that the proposed development will result in significant effects.”

Stirling Council planners added: “The site is an improved pasture considered to be of limited ecological value. The site falls within the Battle of Sheriffmuir Battlefield. There are no areas on the site that are protected under international or national legislation for their cultural heritage value. Rylands Lodge to the north is noted as a listed building, however it is not considered that the proposal will have a significant effect on the listed building or its setting.

“The site is adjacent to Dunblane and will be visible from a number of public vantage points – including footpaths.

“The magnitude and complexity of the effects arising from the proposed development are expected to be limited and confined to the local area.”

They concluded: “The duration and frequency of the potential effects are not significant and are largely reversible.

“Whilst there will be some effect from the proposal on the environment, it is considered that these can be addressed through the design process, methods of construction and compliance with the legislation of relevant regulatory bodies.”

Read 407 times
More in this category: « George Street/Springfield Terrace Closures Built prior to 1919? Building health check available »
back to top