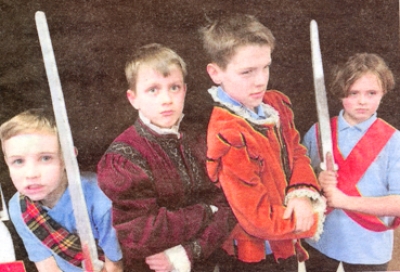 From the Stirling Observer 13 March 2019

The remarkable story of life in Dunblane over 2,000 years was revealed in drama, song and movement to delighted audiences in Dunblane High School's theatre.

A total of 130 children from the three local primary schools of St Mary's Episcopal, Newton and Dunblane told the tale in rapid scenes that transported the audience back in time to meet real characters from the local past.

The children all aged nine to 10 years gave an outstanding set of performances that had the audience laughing and surprised in equal measure. The story was backed by more than 200 powerpoint images and facts which showed the evidence of the history being revealed. "I am absolutely stunned," said Dunblane Primary head teacher, Lorraine Slabbert, as she thanked the cast in public after the evening performance. "I cannot believe what I have just seen. You have taught me so much that I didn't know and you were so polished and slick."

The show was researched written and directed by Tapsalteerie Theatre led by David and Jackie Smith, with lan Turner on sound.

"We were quite overwhelmed by the audience's emotional response," said David who is also the learning officer at The Stirling Smith Art Gallery and Museum.

"People were queuing up to tell us how impressed they were by the performances and by the amount of information they had picked up in just 75 minutes.

"Repeated remarks included 'What away to learn about your past!' and 'I wish history had been that much fun when I was at school"

The list of astonishing characters who have visited or lived in Dunblane is one for other towns to envy. Featured in the production were the early Picts, Britons and Vikings who all fought in the area. They followed on from the great Roman General Agricola who also visited.

Then there was St Blane who settled on Dunblane's Holmehill around the seventh century and is likely to have given the town its name; Oliver Cromwell on his [literally] burning mission through Scotland came to Dunblane; Bonnie Prince Charlie stayed in Dunblane in 1745 and his father's failed campaign ending with Sheriffmuir had the final chase of the battle through the streets of the town.

Robert Louis Stevenson was a best friend of Thomas Smith, a Dunblane man from Glassingall who founded the Stirling Smith Art Gallery and became the hero and idea behind Stevenson's classic novel Kidnapped. Robert Burns stayed in Dunblane in what is now the Riverside Hotel and secured his last exciseman job in Dunblane, but sadly died before moving to live there.

The children also celebrated Reo Stakis, who is the father of modern hotel chains, Andrew Butchart, Olympian and British 5,000 metres champion as well as ex pupil "and top of the tree" Sir Andy Murray.