Fiona plays her football in Malmo 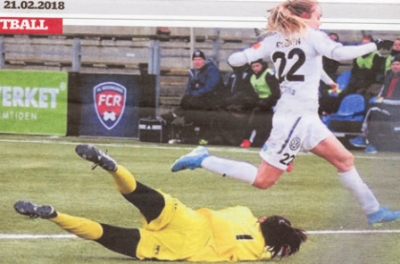 From the Stirling Observer 21 February 2018

Moving to one of Europe's most famous clubs would undoubtedly be a daunting prospect for many a footballer. However Dunblane's Fiona Brown has taken no time in settling in to life at Sweden's FC Rosengard - relishing the prospect of sharing a changing room and training pitch with an array of top class athletes.

The 22-year-old moved to the Malmo club, who have won ten league titles, towards the end of last year after impressing in her debut season in Sweden's top flight for Eskilstunda United DFF. She made her club debut in a cup tie earlier this month before netting a treble in her most recent outing, a cup tie against lower league Qviding FIF, as her side ran out 16-0 victors at the weekend. And she spoke to the Observer about her delight at earning a move to Rosengard - who have recently seen top players move on to clubs such as Chelsea and Barcelona. She said: "I got the call last year and I just wanted to grab the opportunity with both hands. They are such a massive club who have achieved so many things. I couldn't say no.

"I had a great time last year [at Eskilstunda United DFF] but I'm now training with players who have won World Cups and Olympic medals. The professionalism is a big thing. I'd also say the vision of the coach is a big thing for me and it really suits my game. He encourages us to attack, find pockets of space and allows us to play with a bit of flair, and that should help me." She added: "We lost some of our top attacking players last year. Some of our players have moved on to other big clubs, but we still have a lot of top players here."

Fiona explained that her new team have high hopes for the upcoming Swedish season - of which the national cup competition is already underway and league season starts in April. She said: "We want to win the league 100 per cent, and the cup. I've experienced competing for titles before, when I was in Scotland, and it's always really exciting to start the season with that aim. "It's an extremely competitive league over here and the standard is really high. Everyone can beat each other on their day, so it's going to be a good challenge." FC Rosengard also have pedigree in the Champions League having been a regular fixture in the latter stages of the competition.

Fiona started her career at Celtic before moving on to Glasgow City in 2014 where she remained for two years before heading abroad. The attacker, who studied at the University of Stirling, is also already a seasoned Scotland international with more than 20 caps to her name. She starred for her country at last summer's European Championships, where the Scots missed out on group qualification by a single goal. The team won respect for bouncing back from a crushing defeat to England to inflict a giant killing on Spain. And Fiona says things are going well under new head coach Shelley Kerr - former University of Stirling football coach. She said: "Things are all really positive with Scotland just now. Shelley Kerr has come in and put her stamp on things. We've won both qualifiers and come away with six points, so we have to be pleased with that. "It's always an honour for me to pull on the Scotland shirt. As young footballer that's the thing you always dream about. "It's nice to catch up with everyone too. We're actually going away to La Manga on Monday for some training and preparation