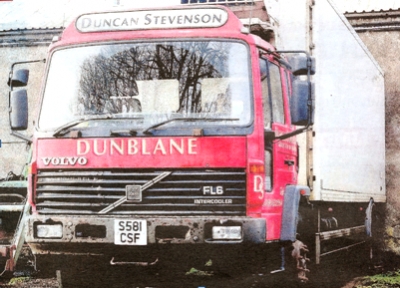 Slaughterhouse staff, some with up to 40 years' service, were last week shown the door after their company collapsed

Liquidators turned up at DS (Slaughterhouse) Ltd, Dunblane, on Tuesday, February 6, and told the company's 11 employees that their employment was terminated with immediate effect. The devastated staff, mostly slaughterhouse operatives, were ordered to collect their personal belongings and leave the Stirling Road premises. One staff member said the employees were in shock and claimed that there had been no inkling of the impending liquidation. DS (Slaughterhouse) was incorporated in March, 1977 and had been run by the Stevenson family for many years. They provided slaughterhouse services for butchers across the Stirling area and as far away as Oban, but the Dunblane facility was operating only three days a week recently.

On November 24 last year at Stirling Sheriff Court, a petition was lodged by the Advocate General for Scotland, on behalf of HM Revenue and Customs, asking that the company be wound up by the Court and a liquidator appointed. Maureen Leslie, director of financial recovery, restructuring and debt advisory company MLM Solutions, which has offices in Glasgow and Edinburgh, was appointed interim liquidator on January 26 and it was members of staff from MLM who went to the premises last Tuesday. An MLM spokesman said: "We quickly determined that there was no option but to close the facility and all staff were made redundant on that date. "We would like to thank the staff at DS (Slaughterhouse) for their help in bringing operations to an orderly closure. All outstanding deliveries will be honoured."

The staff member, who asked not to be named, said: "We had no idea whatsoever that this was going to happen. "Two people appeared and took us into a corridor and told us to collect our personal belongings and leave. They said the company had gone into liquidation and we would not get paid, as we usually did, on Friday. "Later we got a letter from the liquidators saying that we could apply for statutory redundancy money from the Government but there would be nothing from the company." He added: "People should have been made aware that the company was going to close. Had we been pre-warned then we could have looked out for other jobs or made other arrangements."

Alasdair Beaton, owner of Alexander Gray butchers. Upper Craigs, Stirling, who had done business DS (Slaughterhouse) since its inception, expressed regret at the closure of the facility. He said: "The loss of the slaughterhouse run by the Stevenson family for over 40 years will be felt by the farming and retail butchers over a wide area as a most efficient and professional service was much appreciated by all its users."

DUNBLANE'S only abattoir is to cease slaughter after being in the business for 40 years. Duncan Stevenson Ltd, which employs 12 members of staff, was said to have closed its doors, with its final intake taking place on Tuesday, February 6. Although no official reason was given for its closure, it was claimed that throughput at the outfit had been decreasing annually, but that the set-up was exploring all options available, and that it hoped the closure would only be for the short-term.

Auctioneer at Caledonian Marts, Stirling, Alastair Logan, said that he was informed of the closure on Tuesday evening, and that it would be missed by farmers all over Scotland.
"It's a real shame that the abattoir has been closed, as it's a great wee family-run business, and it's been there for years," said Mr Logan.  "I haven't heard all that much about it, other than a phone call I received on Tuesday evening to inform me that it would be closing, and that no more livestock was to be sent there."  Mr Logan also added that throughput at the site had been declining each year, but that business was consistent, with farmers taking small numbers of livestock there on a regular basis, calling it a "tractor and trailer job".  He continued: "Farmers went to that site from all over Scotland, from Kinross to Oban, and as far north as Perth and Aberfeldy. It'll be sorely missed."

NFU Scotland livestock policy manager, John Armour, said: “With the closure of Orkney abattoir a few weeks ago, a further abattoir shutting its gates shows how fragile local abattoir provision is.  “From a cattle and sheep perspective, there will be a loss of private slaughter capacity in central Scotland because of this development, but we are led to believe that capacity in other central belt abattoirs should be able to cope with any additional throughput required for butchers and other private customers.  “We will continue to monitor the situation and keep livestock producers who previously supplied Dunblane aware of any developments.”  NFU Scotland’s animal health and welfare policy manager, Penny Middleton, commented that the industry must consider alternative options on the future of local abattoirs: “The closure of the Dunblane abattoir is bad news for the contract kill sector.  "Coming on the back of Orkney closing, we are running desperately short of options for producers looking to self-market their own product, without incurring significant additional costs.  "We are in danger of stifling innovation amongst producers and local food initiatives looking to add value to their products. These abattoirs provide a key service but tend not to meet the criteria needed to obtain funding through options such as the food processing grants.  "We need to reconsider the value these facilities provide to the local community, and look at ways we can support them going forwards.”

Read 136 times
Tweet
More in this category: « Have Your Say - Stirling Care Village Dunblane BB helps Start-Up Stirling to deliver »
back to top