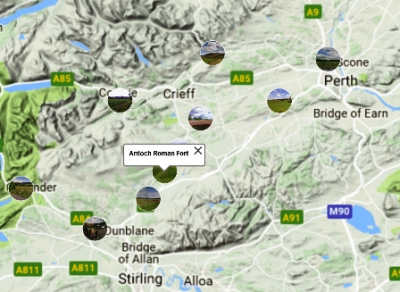 The Gask Ridge is an early chain of frontier forts, watchtowers and fortifications built by the Romans in Caledonia (Scotland). The Ridge comes close to Dunblane at the Ardoch Roman Fort in Braco, the Glenbank Fortlet, Doune Roman Fort, and Bochastle Roman Fort in Callander.

The fort system was built around 80 CE along the Highland Line, the boundary between Scotland’s fertile lowlands and mountainous highlands. Beginning at Glenbank north of Dunblane and finishing at Bertha, the Gask Ridge was one of Rome’s earliest fortified land frontiers. (Construction on Hadrian’s Wall wouldn’t begin for another 42 years)

The military centre of the frontier was the Legionary fortress of Inchtuthil overlooking the north bank of the River Tay. Inchtuthil was built for the forces of Governor Gnaeus Julius Agricola as the advance headquarters for campaigning against the northern tribes.

The traditional theory for the forts construction was to prevent invading Caledonians from raiding Roman-held lands. The value of the forts to block a larger mass invasion from the north is doubtful, as only Inchtuthil had the necessary soldiers and defensives to place a hurdle strong enough to fight a war along the chain.

Recent archaeological evidence has even shown, that depsite many of the forts on the Gask Ridge being rebuilt, sometimes twice, there is no evidence of destruction occuring through warfare. North of the Gask Ridge was a series of marching camps that the Romans constructed in the 1st century during their exploratory campaigning as far north as Inverness (and possibly further).
By 86 CE Rome established a policy of three standing legions for Britannia, and a military withdrawal south was declared. The Gask Ridge frontier, along with its fortifications was abandoned no later than 90 CE. Find out more

Read 124 times
Tweet
More in this category: « Dunblane project wins National Rail Award Dunblane Post Office is upgrading their till system on the morning of Thursday 18 January »
back to top