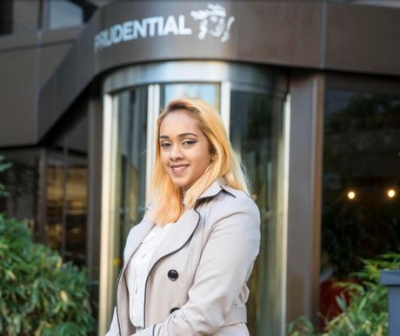 Teenager Nanayakkara Gunasinghe decided to sign up for a Foundation Apprenticeship (FA) after a careers adviser recommended them – and reckons the programme gives pupils the edge when it comes to the world of work. The 17-year-old from Dunblane completes an FA in Financial Services next summer and would like to do a Modern Apprenticeship after that. The two-year training programme, developed by Skills Development Scotland, gives youngsters real practical work experience as well as a qualification. Nanayakkara is also studying Highers in Media and English is already feeling more secure about the future. The Dunblane High School pupil applied for the FA despite lacking a vital maths qualification – but was accepted after showing a strong work ethic.

Nanayakkara, who is interested in politics and the cinematic arts, explained: “One of our neighbours is a careers adviser and recommended an apprenticeship because she knew I’d like it. “I felt that the course would give me a better chance than other people because you get so much experience in the workplace and a qualification at the same time. “When I applied I didn’t have my National 5 in maths but was accepted because what is needed is to show that you want to work hard and that you want to go places in life.”

For the first year, Nanayakkara spent alternate Fridays at Forth Valley College and at financial firm Prudential – but now works at the company’s offices in Stirling one day a week. The ambitious youngster says the job has exceeded expectations and shown the world of work to be less daunting than expected. Nanayakkara said: “The tasks change every few weeks but it has mainly been admin for the managers – helping organise team meetings, taking minutes and updating the system with new client information.

“Anything you do in the first year of your college learning is applied in the workplace so it’s a great opportunity and being in this environment has really helped my communication skills and my confidence. “I’ve also found that when I apply for part-time jobs employers are always very impressed that I have experience in a professional environment.” The teen added: “An FA was definitely the right choice for me and it has absolutely lived up to my expectations. It is hard work but it’s definitely worth the time. “The best thing is being at work. Everyone at Prudential has been really friendly and supportive – it’s just the nicest place you could be.”

Nanayakkara says the apprenticeship also gives youngsters a taste of adulthood. The apprentice explained: “The way you’re taught about work in school can make it seem very daunting but it’s not as terrifying as you might think. “A lot of my friends are worried about what they are going to do next but when you have done an FA you know that you have a career path. “I really do feel a lot more independent and ready for my future.”